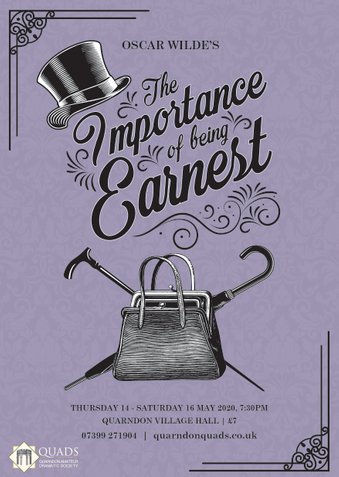 Jack Worthing lives a double life. Sombre, respected and dedicated to bringing up his young ward Cecily in the country, he often has to dash up to town to look after his
wayward younger brother, Earnest. In town....he IS Earnest, living the life of an indulgent bachelor, doing nothing much of any use. He is joined in this by his reprobate friend Algernon. However when a marriage proposal sets in sequence a series of events, it seems as though his secret will be revealed.

Will he be Jack the lad or is he Earnest in his proclamations? All will be revealed, as well as where the nurse left that handbag in this rip roaring production.

We are delighted to welcome Tashi, John, Maureen and Milan to their Quads debut and to welcome back Tom, Danny and Niki. Regulars will know Alex from sell out productions of Don't Dress for Dinner and Living Together.

If you are interested in helping with the Production - backstage, front of house, props, costumes, etc.

please get in touch